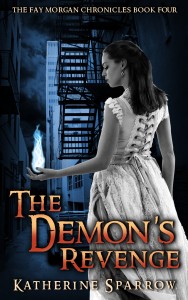 I am so pleased and happy to announce that the fourth short novel of The Fay Morgan Chronicles is out (The Demon’s Revenge), and I hope you love it. This book is a Morgan le Fay and her trusty shopgirl Lila caper, and I had so much fun writing their dialogue and loved the way they are such opposite women, yet have such a good friendship. There are huge character developments with both of them, and some plotlines that have been brewing since book 1 are answered, like what kind of creature Lila actually is, and what Morgan will do now that she fully understands the full depth of her own history. And of course, as per usual, things do not go at all as planned. Here’s the book’s blurb:

Morgan le Fay, the immortal and legendary witch of Avalon, is done with her life. She’s through with making terrible decisions and hurting those she loves. Now there’s just one more thing she has to take care of: she has to help her faithful assistant Lila change into the terrible creature that has remained hidden within her for so long.
Lila has no idea any of this is going on, but does know that she’s sick of Morgan moping around, and that she desperately needs her friend and mentor’s help because the paranormal denizens of Seattle are all starting to act sort of… evil.
Soon Lila and Morgan are trying to piece together the strange clues that will literally lead them to the gates of hell, all while Lila is starting to change. And with her change… everything changes.
The Demon’s Revenge is the fourth short novel in The Fay Morgan Chronicles, an urban fantasy series. Fans of The Dresden Files and The Lily Harper Series should enjoy this series.

For anyone who is new to this series, I do recommend the first three short books first, as the series is very episodic and each book builds on the last one. Also, for anyone who is frustrated by reading this series one short novel at a time, I am going to be soon publishing a book 1-3 as an omnibus, and will do the same for books 3-6 etc. Which begs the question: how long will this series be? I have no idea, except to say I am having a ton of fun writing them, people are buying them (thanks!), and I have a lot of terrible and strange things I’d like to do with these characters, so we shall see.